Ecologists, conservationists and other scientists argue that we are on the brink of experiencing the world’s first mass extinction event since the time of the dinosaurs.  But while previous mass extinctions have occurred due to dramatic natural events like volcanic eruptions and meteor strikes, the next mass extinction will likely be the result of human activity’s impact on the environment. 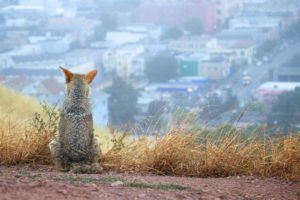 Continuous land development and human sprawl is undoubtedly one of the leading factors in our current extinction problem.  Every time we clear land for a new subdivision or strip mall we are destroying a habitat and creating animal refugees who are displaced from their homes.  Some species learn to adapt to life in urban and suburban environments, but even those that do are threatened by humans who find them to be a nuisance.  At our current rate of development it is inevitable that these animals will eventually run out of places to go.  One report states that the loss or degradation of natural habitat is the biggest threat to the existence of an estimated 85% of vanishing species.

The extinction of these species isn’t a forgone conclusion, however.  There are actions we can take to prevent the devastating loss of so many important plants and animals.  We can be smarter in our development; we can establish firm human growth (sprawl) boundaries, create more protected natural areas and improve green infrastructure.  Ultimately, it is in our own self-interest to develop more wisely and concern ourselves with the welfare of the animals with which we share the world.  A mass extinction event wouldn’t be good for any of us.

To learn more, check out this report produced by the National Wildlife Federation.