Are my kitties playing or fighting? 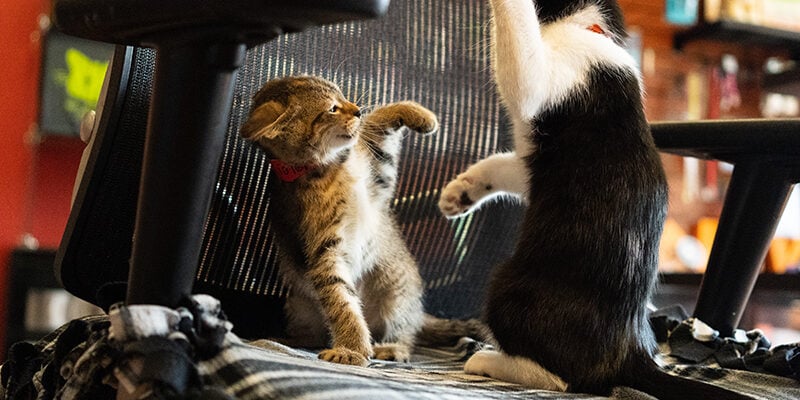 Have you recently adopted a pair of cats or kittens, or added a new cat to your already multiple cat home? Is it sometimes hard to know if your cats are playing or fighting? You’re not alone! Many cat owners aren’t used to seeing cats play hard and are concerned when they see their newly introduced pair of cats wrestling around the living room, potentially vocalizing loudly at one another, maybe batting with claws out or biting one another.

It’s important to remember that all cats, just like dogs, have different play styles. Mismatched play styles can make integrating new cats to a home a bit difficult.  If you’re lucky, you’ll add a second cat who has a similar play style to the cat you already have, or the energy of the new cat brings out a great, new energy in your resident cat. Sometimes, when this happens, you’ll see cats who run at one another, “attack” one another, hissing and sometimes growling, using paws, legs and sometimes teeth as part of their play. How do you know if this is play or fighting?

Watch these interactions closely. Do the cats take breaks from time to time, ceasing play for a moment to “re-set,” but staying near one another to re-engage when they’re ready? Do they take turns during play being the “aggressor”? If one cat runs away, does the other cat chase after and try to re-engage, or does he stay in the living room, grooming himself until the other cat is ready to play again? These are all signs of a good play energy, we’re looking for a good, reciprocal play type from our cat friends, even if that play includes some behaviors that seem over the top.

Take a look at this video from Jackson Galaxy. It  has great video evidence of rough, reciprocal play and could potentially put your heart at ease that your rough and tumble cats are just fine in their play style!