Senior corgi adopted: from skin infections to playing in 1 acre yard every day

We weren’t looking for a second dog, not really…I just happened to be browsing the HSHV adoption listings (again, for no reason at all). We lived in a 900 foot duplex with no fenced yard in Ann Arbor about a year ago, when I saw Aries listed for adoption on the site. We were going to wait to get a second dog until we bought a house. But as soon as I saw the listing that morning, I immediately called up HSHV and put her on hold. Still working from home during the pandemic, I told my boss that I was going to look at adopting another corgi.

After meeting her, we learned Aries had some health issues that were being treated. We had to think about this – adding a second dog with health issues could be a big undertaking. Her surrender papers told a heartbreaking story of an owner who seemed to love her so much, but couldn’t take care of a dog anymore. She had only been to the vet once at age 8 for a historectomy, and supposedly had ongoing skin issues since then. Her health issues were only exacerbated by lack of regular maintenance that all dogs need. The skin infection made her smell gross… but it only took a day to decide that we needed her.

I went back the following day to introduce her to our first corgi, Chicken Nugget. They sniffed each other briefly and went about walking in the grass independently, not really caring about each other. That lasted months into us bringing her home – they were more like “Work Proximity Associates” than friends or siblings, probably because they had each been “only dogs” in their homes. It took three months for her to play with toys but she got there. Treating her infections also gave her more energy. Soon after that, we learned more and more about this goofy personality. Some good, and some – well- shocking. Being overweight by about 10 pounds when we got her (she was previously free-fed), it was our mission to help her lose her excess weight and be as healthy as possible. That proved to be difficult because on more than one occasion, she broke into her food bags stored in our push-to-open cabinets and knocked down trash cans for food foraging when we left home for short periods of time. It was like we never fed her! But we learned from those binges and behaviors and finally curbed them.

Some of her better attributes now are howling at her dad like Chewbacca for food each morning, and running to the door when she hears the word “Walk.” She’s great at catching a ball in the air (given it’s within the vicinity of her face) and gets in silly kissing moods when she tries to get inside your mouth. She and her brother Nugget get along now and often make us crack up with how similar they are in their corgi mannerisms and behaviors. We are so happy to have Aries with our family and it’s been really rewarding to have adopted a senior dog. Thank you HSHV so much for taking care of her. 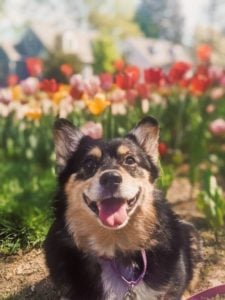