We had 2 dogs who passed within months of each other due to age and I felt so lost without a fur baby. I knew I wanted to adopt and was looking for a Jack Russell. My neighbor had one mixed with Chihuahua and he was pretty sweet.

Then I saw Bailey on the HSHV adoption page and knew she was for us. She was a Jack Russell mix. We got her home and we loved her immediately. She didn’t know her name or any commands. If she could, she would escape and run down the street with us running after her. Only happened a couple of times, but it scared me just the same. She would sit on the back of the couch and just whine. I felt there was someone or something she was missing. She was only 1 year old, but something had been very special to her.

Like I said, she didn’t know commands or a name, no response when we said Bailey at all. So I said Belle and her ear twitched. That was a start and she started responding to it. Since she didn’t know come, I started saying her name and putting my hands out low to the floor, palms up. One day I did that and she paused, looked at me then my hands, and came to me. And has done it ever since. She knows the commands now, and is such a joy. She follows me all the time and doesn’t want me out of sight, even after 5 years. She isn’t whining as much, loves walks, playing with her ball and other toys, and just being the best dog ever. We love her ♥️ 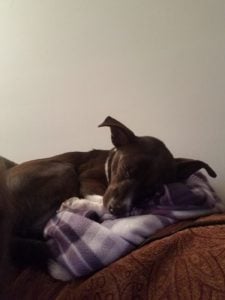