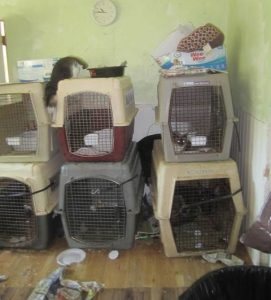 On May 25, 2018, HSHV in collaboration with the Washtenaw County Sheriff’s Department, seized 37 cats, nine dogs, 13 chickens, 10 exotic birds, and two peacocks. Many of the animals were in need of immediate medical attention. All but two of the animals, who were critically ill, have since been adopted.

Investigators from HSHV found excessive feces, urine, and debris littering the yard and inside the home. Many of the dogs and cats were locked in filthy plastic kennels, forced to step and lie in their own waste. Most of the house did not have electricity or ventilation, and there was little food on the premises. The exotic birds, including five cockatoos, two macaws, two conures, and an Amazon parrot, were closed up in a room without light or ventilation.

“Mr. Shelby claimed he was helping homeless animals. This case highlights a common problem whereby people claiming to be rescuing animals are more akin to hoarders, causing direct and serious harm. Good intentions don’t justify or excuse animal cruelty. A good reminder to the public to do your homework before working with any animal group. No rational and caring person would have walked through this home and willingly left an animal here. We are glad they are being held accountable and delighted that nearly all of the animals found happy, loving homes,” said HSHV’s CEO, Tanya Hilgendorf.

The Humane Society of Huron Valley, located in Ann Arbor, is an independent 501(c)(3) non-profit organization and relies solely on the generosity of our supporters to provide critical community programs and services. HSHV is an award-winning organization, recognized for our best practices and highest animal “save-rate” among all similar shelters in Michigan. Charity Navigator, the nation’s top charity evaluator, awarded HSHV a 4-star ranking, the highest possible. The mission of HSHV is to promote the loving, responsible care of all animals in our community. HSHV is not affiliated with any other humane organization and does not receive funding from the United Way. More information can be found on HSHV’s website (hshv.org) and on our annual report (www.hshv.org/annualreport).