Love them or not, urban wildlife are here.  While humans develop land for our own needs, we’re finding ourselves living closer to animals who are finding themselves with less habitat and adapting to ours. As such, human/wildlife conflicts emerge– though there are many things we can do to prevent it!

Tips on Living with Wildlife 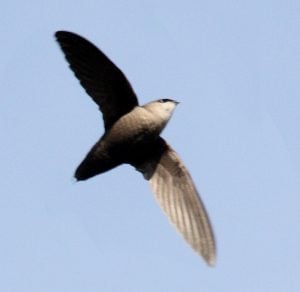 It’s a flying cigar… it’s a plane… it’s a chimney swift! As their name implies these migratory birds often make their nests in uncapped chimneys. Before the advent of European settlers to North America they would build nests in hollow trees and caves.

Want to keep your chimney free and clear of unwanted nest materials? All you have to do is put a cap on your chimney during the winter months when the chimney swifts have migrated south. That way you ensure there are no young birds caught in your chimney. If you would like to help the chimney swifts find an alternative nesting site you can building a nesting tower. Here are some plans to get you started!

To help deter chimney swifts from nesting in your home, try this strategy: 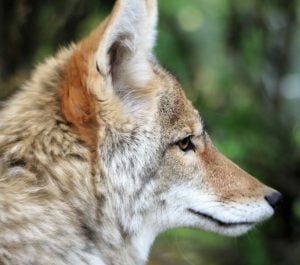 Photo by Pat H on Unsplash

Though coyotes originally only lived in the grasslands of the western United States and Canada, they can now be found across the United States.  These adaptive animals have long been persecuted because of their reputation as livestock predators.  Those living in urban/suburban settings are more likely to be concerned for the safety of their companion animals.  While coyotes are predators who eat smaller animals, they are generally wary of humans and will avoid preying on animals who are accompanied by their human companions.

If you are concerned about your own pet’s safety, you need not worry much!  You can easily protect your companion animal by accompanying them while outside.  This is especially true at night, as coyotes are nocturnal animals.  Free roaming cats are the most likely domestic animals to be victims of coyotes, so cats should be kept indoors as much as possible.  If that is not feasible, it is important to make sure cats have a vertical space where they can escape (a tree, a tall wooden post, etc.)

To coexist peacefully with coyotes, try implementing these strategies: 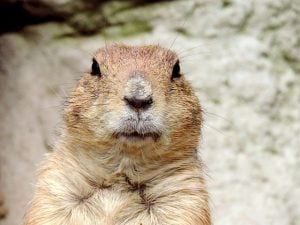 Groundhogs spend most of their time trying to consume sufficient food in order to have enough fat to survive hibernation, and they are attracted to areas where they can find food and feel safe. While they may be considered a pest to gardeners and homeowners, groundhogs are in fact very gentle and often just looking for their next meal. They don’t wander far from their den openings, so by deterring them from living in your yard you can greatly reduce the chances of them wandering through.

Worried about groundhogs building burrows in your lawn? These solitary creatures enjoy living in transitional areas like the edge of a field or in a prairie next to a forest. If you keep debris such as loose stones, woodpiles or compost piles cleaned up then groundhogs feel exposed and are significantly less likely to live in your yard.

To help deter groundhogs from coming near your home or garden try implementing these strategies: 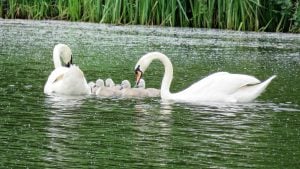 Not native to the United States, mute swans were originally brought the North America to decorate the ponds and lakes of large estates and parks.  The mute swan population has expanded over the years and they can now be found across the U.S. It is not legal to hunt mute swans in Michigan.

Mute swans are not likely to cause conflicts with people, but some people are concerned about their perceived aggressiveness.  Mute swans are known to be very protective of their nests, especially if a female swan is incubating her eggs.  To prevent conflict simply avoid approaching swans, especially if they are nesting or with their cygnets (babies).  To further prevent conflict with mute swans you may try: 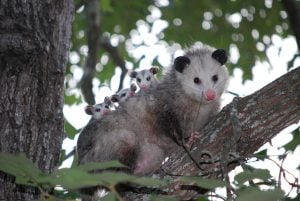 Myths abound about these helpful and misunderstood creatures. Opossums may have a scary look but they are actually quite gentle and have some very beneficial behaviors. They eat ticks and can’t get rabies or many other illnesses due to their low body temperature.

Opossums will keep to themselves and are transient, often spending most of their time wandering around looking for food. While they are mostly nocturnal, it is not unusual to spot one during the day. They may wander into your yard, but they won’t stay for long.

The best thing to do if you spot an opossum in your yard is to wait them out; chances are they will move along soon. You can also: 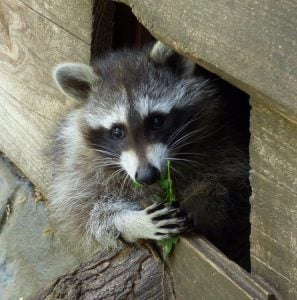 These bandit-masked animals are believed to be just as intelligent as cats and dogs.  Because they are also highly dexterous and resourceful some people find themselves in opposition to these clever animals.  While raccoons used to only be found in forests they have learned to adapt to living in urban and suburban environments as their natural habitats have been destroyed.  Raccoons love to seize an easy opportunity, so unsecured garbage bins and accessible pet food encourage raccoon visitors.  Similarly, small openings that allow access to attics, chimneys or garages are appealing to raccoons looking for a den.

Raccoons generally do not pose a threat to humans, but can cause damage to property.  The easiest way to avoid conflict with raccoons is prevention!  Follow these tips to avoid potential raccoon problems: 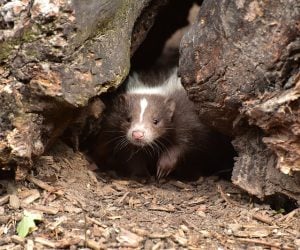 Photo by Sipa on Pixabay

A gentle creature with many beneficial behaviors, skunks can be unnecessarily feared by humans because of their pungent smelling spray. Skunks are not aggressive in nature and will rarely bother humans. Because their eyes don’t clearly define what is in front of them, it may appear that they are approaching humans when in fact, they are harmlessly walking about in search of food. Munching mostly on small rodents, insects and grubs, skunks are great at natural pest control and tend to enjoy the critters that many humans don’t.

Fearful of being sprayed? When a skunk is feeling threatened, he/she will give several warning signs before spraying. These include stomping their front feet, lifting their tail and hissing. It is when humans or our unleashed pets don’t heed their warnings that these docile animals feel the need to further protect themselves and use their powerful spray. If you come across a skunk, moving away slowly and quietly will help ensure that a skunk will keep their spray to themselves.

To help deter skunks from coming near your home, try implementing these strategies: 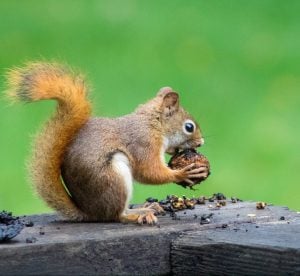 Whether you live in the city, country or somewhere in-between you’re likely to have crossed paths with a squirrel.  Some species of squirrel, like the fox squirrel, have actually learned to thrive amongst human populations.  For the most part, squirrels and humans can exist side-by-side without conflict, but occasionally undesirable situations can arise.

Some people are put off by squirrels raiding bird feeders.  Fortunately, there are many bird feeders on the market these days that prevent squirrels from being able to reach the food in bird feeders.  If squirrels emptying the bird feeder is a problem, you could also consider only filling your bird feeder with foods that appeal to birds but not squirrels, such as white millet seed, Niger thistle and safflower seed.

To further prevent conflicts with squirrels, consider the following: 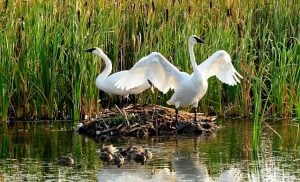 These elegant birds with snowy white feathers are a protected species in Michigan.  It is not legal to hunt or harass trumpeter swans.  Trumpeter swans can be distinguished from mute swans by their black beaks, as opposed to mute swans’ orange bill.

Need an unwanted intruder evicted from your home or garage and want it done with compassion and skill, without causing the animal injury or unnecessary harm? HSHV offers Humane Wildlife Removal Services for Washtenaw County residents. Let us help you resolve your wildlife conflict with compassion and know-how. Our rates are extremely affordable and our care is truly humane. Plus, every cent goes back to help homeless, injured and abused animals!

Please leave a detailed message including your phone number, the problem you are having, your location (city and street) and the best time to reach you. Your phone call will be returned by one of our professional team members. Services are available between the hours of 8 am to 9 pm April 1 through September 30, and from 8 am to 7 pm October 1 through March 31. Please note: Spring, summer, and sometimes fall can be extremely busy for our rescue department. Injured and orphaned animals come first, so we regret we may not always be available right away.

If you have a sick or injured animal please call our FREE Animal Rescue Line at (734) 661-3512. Our Humane Wildlife Removal Service is only for healthy animals that need to be humanely removed and released onsite. Thank you.

Please note: We do not remove animals from yards.

If You Find Sick, Injured, or Abandoned Wildlife

Our partnership with wildlife rehabilitators has saved thousands of lives. If you have a general question or would like information on wildlife, these agencies are excellent resources:

And HSUS (no relation to HSHV) has lots of great information on orphaned and injured wild baby animals as well.