Cat got the zoomies? Should you be concerned? 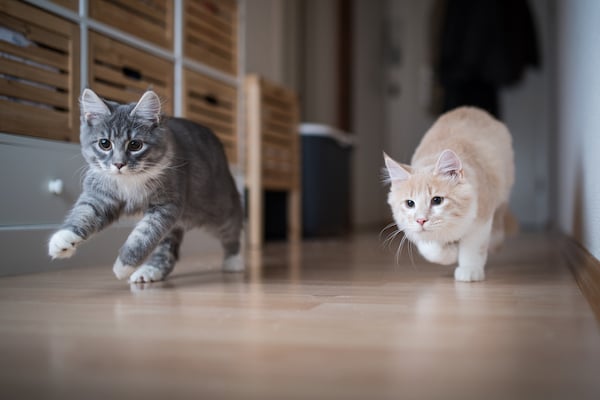 Most people are familiar with the concept of dog “zoomies,” but it’s not as widely known that cats can, and do, absolutely have the zoomies, too. Those moments when your cat is spontaneously tearing around the house and you can’t get him to stop, even for his favorite treat? He’s likely in zoomie mode.

Why does this happen? It could be that he just woke up from an epic cat nap! Cats can sleep up to 16 hours a day to conserve energy for hunting. When they wake up, the zoomies can happen because they’re reinvigorating their minds and bodies for the hunt. Sometimes a cat will just get up and run about, seemingly chasing nothing. That’s because cats, as a prey species, like to stretch their predation skills and are, indeed, chasing an imaginary mouse. It’s also entirely possible that your cat is really just trying to engage you in play, so offering a wand toy or some toy mice to “attack” during a zoomie session is never a bad idea.

Sometimes, your cat will tear out of the litterbox and run around–something you’ll want to keep an eye on. This could indicate a handful of litterbox or medical concerns, and if this behavior is persistent, you’ll want to contact your veterinarian. Other things to keep an eye on would be if the behavior is concurrent with loud vocalizing, weight loss or disinterest in eating or drinking; speak with your veterinarian about those issues, as well.

Jess has worked tirelessly for HSHV since 2001, holding various positions throughout the years and was key in helping create our Trap-Neuter-Return (TNR) program, our barn adoption program and our cat behavior program. As HSHV’s Feline Behavior Specialist, she’s worked with more shelter cats than can be counted, helping cats of all backgrounds acclimate to new homes as well as helping new adopters problem solve. Working with fearful and frustrated cats in the shelter are two of her specialties, and helping families bond with their new cats is something she has always enjoyed, too.