“As a community leader faced with the impact of deer damage in parks, yards, and gardens, and conflict among your constituents regarding an effective solution, you are not alone,” writes Sandy Baker, known nationwide as the “Deer Doctor” for her track record in helping communities solve their deer-related challenges.

Baker will be presenting a free seminar entitled “How to Deer Proof Your Garden,” for area residents on Saturday, April 17 from 10 – 11:30 a.m. She’ll be including a customizable 5-step strategy to working with nature to keep your plants protected. One key to planting success, she says, is understanding deer behavior. 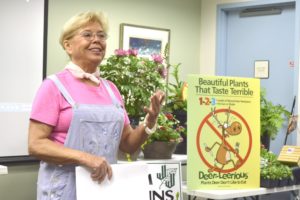 “We are delighted to host the nationally acclaimed ‘Deer Doctor,’” says Tanya Hilgendorf, CEO and president of the Humane Society of Huron Valley. “We’ve heard from so many folks who love the deer and want to co-exist peacefully with wildlife. And even for those who don’t like deer, there are many inexpensive and ecological-friendly tools folks can use without resorting to shooting.”

In 2015, the City conducted an online survey, gathering responses from approximately 2,200 residents (~2% of the city’s population). Just over 900 reported deer damage to their garden plants or landscape, though nearly 700 said they had not taken measures to prevent damage.  Over 73% of respondents said they enjoyed seeing deer in the City.

“We applaud the City for their website encouraging non-lethal solutions. And we hope the expensive and ineffective culls don’t return. Scientists and wildlife biologists confirm that Ann Arbor does not have an overpopulation of deer. And now that we’re approaching year 6 of a 4-year plan, we’ve seen that trying to shoot away the problem is expensive, ineffective, controversial, unsafe, and inhumane. The problem is that there are some deer in places that some don’t want them. The most effective and inexpensive way to address concerns is through site-specific mitigation,” says Hilgendorf.

“We want to help. The push for culling originally came from frustrated gardeners. With better education and strategy we can help those who are experiencing frustration, prevent further frustration, and save the City taxpayer money so that it can be directed where the majority of Ann Arborites really want it to go,” says Hilgendorf. “We also believe our community and our public officials have way bigger priorities over an expensive and highly controversial deer cull.”

The “Gardening with Deer” online workshop is free and open to the public. For more information on the workshop and for the link to join, go to hshv.org/gardenwithdeer