I, like so many others in the United States, suffer from depression and anxiety. With these struggles, a companion often helps. With the help of my family, and some searching online, I found Falstaff. He was 9 months old when I met him in December of 2019, and after meeting with him twice, he melted not only my heart, but the hearts of my family members. It was already a goal of mine to adopt a cat in need- one that had been at the shelter for a long time, an elderly cat, or a cat that needed extra love and care. He fit that perfectly. Azrael, as he’s now named, has FeLV (feline leukemia), so he wasn’t on direct display for adoption. I have an autoimmune disorder as well, so it was a perfect fit. Azzy is now one year and two months old and he’s extremely healthy. He is very food motivated, and loves to play and snuggle with his mom. He gets so excited when I wake up in the morning, and meows nonstop until he can nuzzle my face and smother me in affection. He’s the perfect cat, and I couldn’t imagine my life without him. 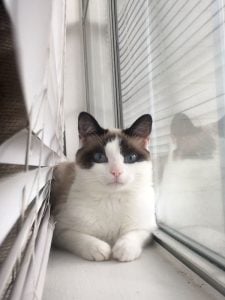