So grateful for these two

Our beloved cat Bitsy passed away unexpectedly in December of 2019, and the house felt empty without a cat. My husband and I went to HSHV a couple times “just to look,” but then he found a 2-year-old orange tabby boy with the most striking golden eyes and we knew we had to have him. He loved on us the very first night we brought him home in December of 2019. Then he got into the catnip and had the zoomies all over our house. That’s how he got the name Flash.

He was so high-energy, I decided less than a month later to adopt a kitten friend for him. I found a poor black long-haired kitten named Anne huddled in her litter pan, obviously really unhappy about being at the shelter. My husband agreed immediately that we had to bring her home. Turns out, that kitten, now named Betty, is severely visually impaired, probably something shelter staff didn’t figure out since she wasn’t moving around and bumping into things much in her crate at HSHV. She’s also kind of low-energy and not quite the romping kitten friend we intended for Flash, but they mostly get along, and she is a sweetheart who has become more and more brave and curious over the last year. More people should consider blind cats – they are really not much more work than a sighted one! I am SO grateful that we adopted both of them just before the pandemic came to Michigan. They have been two bright spots in a dark time. 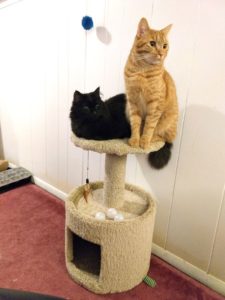