For those crying Wolf

If you’ve heard of Ann Arbor’s annual deer killing you have probably heard that deer are overpopulated due to a loss of natural predators, specifically wolves, leaving us no choice but to hire sharpshooters.

Since it continues to be repeated by elected officials as the basis for expensive public policy, I guess it’s time to stop rolling my eyes and to review a bit of wolf history and explain why wolves are not at the root of our problem and could never be part of the solution.

It is true that wolves once roamed our entire nation, including our state and county. The native Ojibwe people of the Great Lakes believe wolves to be their brother, and they are a prominent part of their creation story. Wolves were also revered by other Native cultures on our continent. But European settlers brought with them their culture of despising and maligning wolves, considering them to be evil, dangerous (think of the “big bad wolf” of fairy tales), and deserving of death by any violent means.

So, in addition to loss due to mass habitat destruction, wolves were killed in barbaric ways by European settlers until they nearly disappeared. According to the Michigan DNR, the last wolf was eliminated from the Lower Peninsula in 1935, and by the time the state had repealed its bounty on wolves in 1960, wolves had nearly vanished from the Upper Peninsula, too.

In 1973, wolves received protections under the Endangered Species Act. Since then, they’ve begun to make a very modest comeback and Michigan’s UP is believed to be home to a population of about 660 wolves. And while there have been one or two confirmed sightings in the LP since then, because wolves are terrified of humans, and need large spaces of land to find food and raise their families, it is extremely unlikely that they would want to be anywhere near the densely populated area of southeast Michigan. 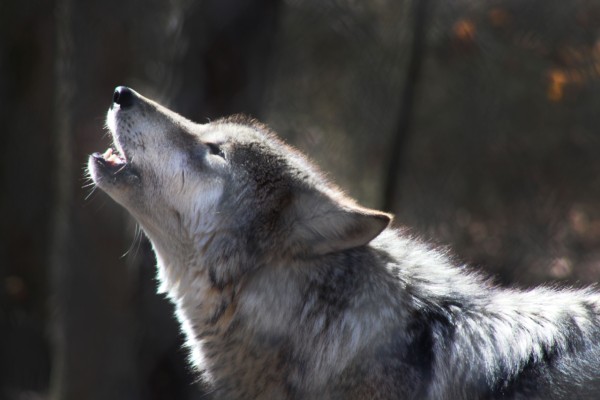 But it is also important to note that while wolves are an essential part of a natural ecosystem, they do not have a significant role in reducing deer population. Wolves live in family packs, are territorial and may roam hundreds of miles in search of a meal. Favorable habitat averages one wolf per 25 square miles. Ann Arbor is about 28 square miles.

According to average meat eating habits, a wolf consumes enough meat to roughly equal 15-20 deer a year. This includes road-killed deer, deer scavenged and those they kill. And that’s based on the unlikely scenario that they’re eating only deer, though wolves consume other ungulates and small mammals such as beaver and snowshoe hare, and they supplement their diet with berries and even grasshoppers.

And, like all of us, wolves prefer the easiest catch. As such, they also select the weakest of the herd—the young, old, sick and injured. As you may recall from 8th grade biology, this process actually strengthens the herd. And, further confounding simplistic spins on the impact of predation on population, is the question of how many weakened animals would die anyway.

Michigan deer are also “native,” and about 1.75 million strong in Michigan. They, too, were subject to overhunting in the early 1900s. After protections were put in place, they’ve bounced back, and the population is now maintained very carefully in more northern areas by the State of Michigan for the sole benefit of the hunting industry (which, in Michigan, funds about 20% of the DNR).

The Ann Arbor area has always had deer. But culling didn’t start until 2015, almost a century after the last wolf disappeared from the Lower Peninsula. And far more deer are killed by cars—even after FOUR years of culling— than would be killed if the deer and wolves were cohabitating naturally.

In further dissimilarity to wolf predation, the City aims to kill 150 deer within a few weeks’ time, and makes no distinction between the strong and the weak. (Or those who have learned to avoid crossing roads and can teach their young to do the same, and those who haven’t.)

But not only are we not acting anything like wolves to reduce population, we also never had an overpopulation to begin with, as confirmed by the DNR.

The real reason for the cull is that we have exceeded our “social carrying capacity,” defined not by numbers, but simply the public’s tolerance of deer.

I would argue, however, that this also isn’t entirely true because the City’s own surveys show the majority of residents are okay with or enjoy the deer.  Quite tolerant, actually.

But Ann Arbor is a swiftly growing community. In 1950, there were 48,000 residents. In 2019, 122,000. Plus the 45,000 and growing student population. Every parcel of land is being bulldozed for more high-priced housing and the perpetual University of Michigan campus expansion. Within and between are small carve outs of natural space—the last vestiges of home for some wild animals.

Add to this the beautiful Huron River. The river is perfect habitat (minus the PFAS) for all sorts of wildlife, but is also the backdrop to some of our most expensive human real estate.

This has set the stage for human/animal conflict, particularly with those trying to maintain pristine landscapes and museum-like conditions in our “natural” areas. But this conflict has nothing to do with the number of deer or wolves.

The first step in any solution is admitting you have a problem—a problem that has nothing to do with wolves, or lack thereof.  Honesty about the cause of the conflict between humans and animals will get us to lasting strategies that increase tolerance instead of hate, get to a solution instead of blame, and end the misplaced, unending, senseless violence against more animals.

P.S. Ann Arbor will be culling deer this winter for a fifth year on an initial four year plan. Protect your family and know which parks will be closed for taxpayer funded sharpshooting on the City’s website.