Second try is the charm! 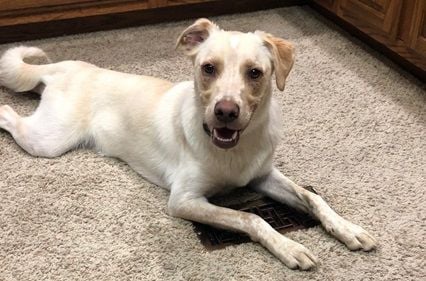 Frost had been a Love Train puppy but was adopted by a single mom and her 2 little girls, and they lived in an apartment. As puppies do, he nipped and jumped and was generally rambunctious. So they returned him to HSHV. We found him after visiting HSHV on a Love Train Friday and not finding the right dog from the puppy selection. He was a 6 month old WACKO HYPER dog when we visited him in a room out back, but we realized that it was because he was just so happy to have someone visiting him.

We took him for two short walks and he did extremely well on a leash. We decided to take him home, and with some persistent training over that first year, he has revealed his truly smart, cuddly, loving, loyal and fun personality. He will play fetch for an hour if you let him, and has discovered the fun of car rides and chasing rabbits and squirrels on our 10 acres. He is now 4 1/2 and has had some serious allergy and other health issues, but we feel fortunate to be able to financially take care of his needs.