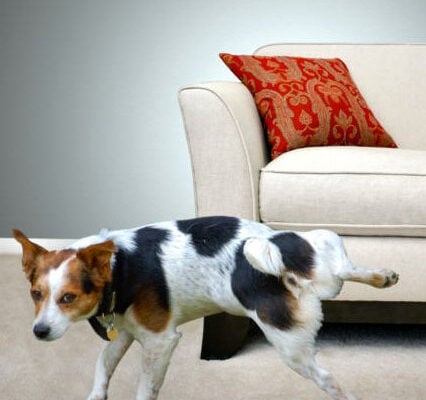 Your pet may be urine-­marking if:

What You Can Do

What Not To Do

Don’t punish your pet after the fact. Punishment administered even a minute after the event is ineffective because your pet won’t understand why he is being punished.

Dogs and cats don’t urinate or defecate out of spite or jealousy. If your dog urinates on your baby’s diaper bag, it’s not because he is jealous of, or dislikes your baby. Likewise, if your cat urinates on your new boyfriend’s backpack, this is not his opinion of your taste in men.

Some pets may mark when they feel anxious or upset. For example, a new baby in the home brings new sounds, smells and people, as well as changes in routine. Your dog or cat probably isn’t getting as much attention as he was used to getting. All of these changes cause him to feel anxious, which may cause him to mark. Likewise, a pet who is generally anxious may become more so by the presence of roaming neighborhood animals in your yard, or by the introduction of a new cat or dog into your household. If your pet is feeling anxious, you might consider talking to your veterinarian about medications to reduce his anxiety while you work on behavior modification.