I adopted sweet Wilbur in August 2020. I was looking for an older cat and the volunteer showed me Wilby, named Kiki at the time, and said something like “He’s super sweet, he just has that little grumpy face.” He didn’t move from his bolster bed, but immediately stretched his little wedge head out to bump my hand over and over and purr. When I got him home, he immediately squeezed under my bed (he was almost too fat to fit) – but then turned right around, laid his face on my hand, and purred.

The first week I had him, he was super sick – on top of his dental disease, he came down with a bad cold right after getting home. For a few days, the only things he’d eat were beef baby food and squeeze treats, and only off of my hand. Apparently he’d lived in the same home with his sister all 14 years of his life, but had been given up alone – he must have been so scared. Despite all that, he climbed into bed and cuddled up by my side starting the first night. That’s just his personality – super trusting and loving, loving, loving, not a grump at all.

About nine months, a kidney-conscious diet and a lot of tooth extractions later, Wilbur is THRIVING. In cat years, he’s graduating law school too! He’s a real couch potato (and cave potato, and lap potato). He’s reversed his lack of appetite and is a now a total hog (“some pig”). He is astoundingly peaceful and gentle, and has never hissed or swatted. He LOVES belly rubs and will just lie there for as long as you want to pet him. He’s weirdly into my feet, booping them with his head when I get out of bed in the morning and lying on them when I’m at my desk. He craves attention, but is mostly polite about it (he just plops down and looks up with those big bug eyes) although he does get mad sometimes when I’m paying attention to notes instead of him and tries to take a chomp out of them! I love this round little gremlin so much and am so glad I can give him a retirement home. 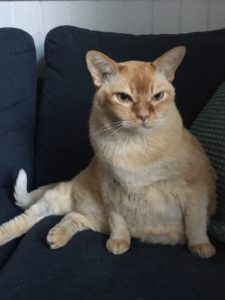