We adopted Kili (formerly Lawrence, which we kept as his middle name) just over a year ago. We had a resident cat already, and felt she would do better adjusting to a kitten than an adult. My husband really wanted an all-gray kitten, and Kili instantly captured his heart. When we were going through the paperwork, they gave us a handout on how to socialize a “shy kitten”. Kili could not be further from a shy boy! He is always running around, annoying his sister, and wanting to meet everyone who comes in the door! He often chirps instead of meowing, but the cutest thing he does is carry his Lampchop around with him. We love him to bits and he has added so much to our little family! 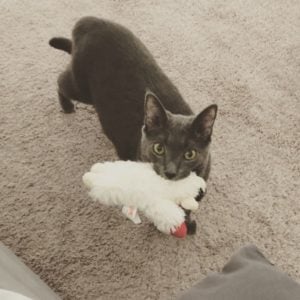