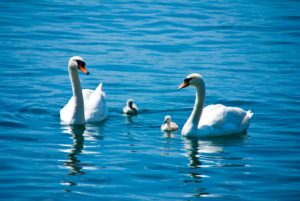 Photo by Robert Ruggiero on Unsplash

Swans are under attack.

Despite having been in Michigan since 1919—and in Europe and western Asia before that—mute swans have been labeled “non-native,” “alien,” and “invasive” by those who don’t like them.  Such pejorative, fear-mongering categorizations are being increasingly rejected by biologists, conservationists and ecologists. After all, honey bees are “non-native” to North America (having also been brought over from Europe), yet we’re trying to increase their population. A living being’s value cannot be reduced merely to its place of origin, and attempts to use a label as a way to disguise intolerance is neither scientific nor helpful in addressing problems in our community.

But human conflicts with wildlife are tricky.

To address residents’ conflicts with mute swans, think about the case of feral cats—also considered pests by some. For many years, feral cats were killed, but their populations rebounded. “Trap-Neuter-Return” programs have been shown to humanely and effectively reduce the community cat population and resident complaints. Similarly, addling eggs at the earliest stage of development is a humane and effective method of reducing a local swan population. This, combined with deterrents and habitat management can satisfy most humans who live around them—both those who appreciate the swans and do not want them to be killed, as well as those who fear the swans and would like to see their populations reduced.