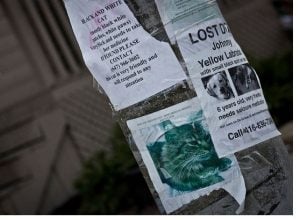 Approximately 70% of households own one or more pets in Michigan, equaling an estimated 4.7 million dogs and cats.  Most are considered a beloved part of the family.  According to national figures, one in three of these pets will get lost at some point during their lifetime, causing great distress to their human guardians.  As a result, most communities throughout the United States have designated stray hold facilities whose role it is to be a safe haven where families can find their lost pets. Since 1969, licensed shelters in Michigan that take in strays have been required to follow a 4 or 7 day (depending on if the animal has ID) stray hold law (MCL 287.388) for animals found loose without an owner.  We are in favor of the Stray Hold Law, and while we desperately need this bill, HSHV opposes it in its current state based on several flaws.

Since 1969, licensed shelters in Michigan that take in strays have been required to follow a 4 or 7 day (depending on if the animal has ID) stray hold law (MCL 287.388) for animals found loose without an owner.  This law has been strictly enforced by the Michigan Department of Agriculture and Rural Development (MDARD), the department that licenses animal shelters.  However, after being legally challenged by a large, private Michigan shelter, MDARD has recently notified all shelters that it will no longer be enforcing the current stray hold law (based on its being located in a section of the law pertaining to the use of dogs and cats in research).

Following MDARD’s announcement, Michigan now stands nearly alone in the absence of a state mandated stray hold.  The Humane Society of Huron Valley (HSHV) firmly believes in the importance of stray hold times as a basic and essential protection for pets and their owners, and will continue to follow the policies we already have in place.  So while pets and pet owners in Washtenaw County are safe (as long as the animals don’t cross county lines), many in Michigan are now in a precarious position.

HB 4915 was introduced by Representative Mike McCready to help rectify this issue.  While we desperately need this bill, HSHV opposes it in its current state based on two serious flaws:

1)    Cats as second-class pets:  The bill reduces stray hold times to “zero days” for cats that are “candidates for adoption or sterilization programs.”  Though we strongly support a bill that promotes Trap, Neuter and Return — where unowned cats are sterilized and returned to their original location — as the only proven effective means of reducing overpopulation, the vague use of the word “candidate” leaves the option to euthanize stray cats at intake, as sadly many Michigan shelters would still prefer to do.  Further, we believe “adoptable” cats, like dogs, should also be held for the minimum hold times of 4 or 7 days to give owners a chance to find them.

2)    Wide discretion to euthanize before hold times have expired:  The bill also states that “(A) AN ANIMAL THAT WOULD BE SUBJECTED TO UNDUE SUFFERING” can be immediately euthanized.   Though we agree with the essence of this statement, the language gives too much discretion to shelters to define “suffering.”  Many common or treatable conditions such as fear, arthritis, blindness, contagious disease, or old age could be used as justification to immediately put a lost animal (dog or cat) to death, without regard to hold times.

Respecting and promoting the loving bond between people and their companion animals should be at the core of animal sheltering work.  Basic stray hold times applied consistently to both dogs and cats, and clear definitions around justification for euthanasia provide important protections to both people and animals.  HSHV and our supporters want to see increased adoptions and sterilizations, and the elimination of unnecessary shelter euthanasia across the state—not stripping families of the right to reclaim their lost animals.