I had just moved to Northern Michigan after living in the Brighton area and I was scrolling through Facebook and saw a picture of the cutest dog from HSHV. I decided when I was visiting family for Thanksgiving I would stop in and meet him. My first thought upon meeting him was that he had the biggest head of any dog that I had ever seen, and he was adorable and such a goof! I ended up taking him home a few days later. On the 3 hour drive home he was nervous and did not really settle down. Once he finally got in the house, he got the zoomies and ran around and then passed out belly up – and I knew I was in love!

Ever since then, he has brought so much happiness into my life! Everyone loves his big head and his goofiness. One of his favorite things is pillows. He loves to fluff up a giant pile of pillows and pass out in the middle of them. We live on a lake and he has taken over a chair right by the window so he can watch the passing boats and squirrels. He now has a dog brother and cat sister, and they all get along so well! Cedric was my first dog since moving out of my parents and I am definitely the luckiest dog mom for adopting such an amazing doggy! 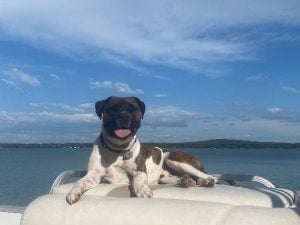