Mugzy with the Helicopter Tail

On June 16th 2013, Mugzy found his way to HSHV. Severely flea infested, his ears and eyes swollen shut. His HSHV medical records revealed that removing one or both of his eyes might be necessary. However, due to the dedicated and diligent care of HSHV veterinary staff and Mugzy’s cheerful disposition through it all, after entropian surgery on both eyes, Mugzy’s eyes improved immensely and he was released for adoption.

My husband and I had been considering a companion for our eight year old Shar Pei, Luke. We were both working long hours and thought Luke may enjoy the company of a companion. My husband went to visit Mugzy who greeted him with a huge smile, tail wagging in helicoptor circles as if to say; “Where have you been? I’ve been waiting for you.” He stole my hubbie’s heart. So, after a meet and greet with Luke (who seemed totally disinterested) Mugzy became ours.

It turned out that Luke never wanted a brother. Mugzy tried all kinds of antics to become Luke’s friend but Luke merely tolerated him. Mugzy took it all in stride and decided that humor was his only recourse. Luke always wolfed down his food. Mugzy would consistently eat slower and slower while Luke watched him from around a corner. Then Mugzy would leave a couple of bites in his bowl and walk away. When Luke would swoop in to get those bites, Mugzy would charge back barking at him. Mugzy has never cared much about toys, but Luke did. So, Mugzy would stealthily grab Luke’s toy’s and charge through the house with them or shake them in Luke’s face. Luke reluctantly tolerated him. But Luke had his chair and his bed and Mugzy respected those spaces.

Our neighbors have a German Shephard that doesn’t like Mugzy. Their dog got loose one day and, with hair standing on end, eyes glaring and teeth flashing, he charged after Mugzy. We averted the attack but Mugzy seemed totally confused by it. Mugzy is frequently off leash when we are outside with him in our front yard. The day after the GS attacked him, while we were outside with Mugzy, he sneaked over to our neighbor’s house and sat in front of their patio door in an attempt to mend the relationship.

Mugzy is without question the happiest, most resilient and humourous dog we have ever had. He never understands when other dogs don’t like him. But if he doesn’t get the desired result in making friends, he simply goes on his merry way. He is the same with discipline. If we get mad at him or speak firmly to him, he simply wags his tail and walks away. He has won the hearts of our neighbors, our family and friends and become the mascot of the cottage resort we visit in Florida every year. At 11 years old he still acts like a pup spending hours each day chasing squirrels from our bird feeders.

We lost our Luke two years ago at 13 years old. Although they never became the brothers we hoped for, they did share a comfortable companionship. It took over a year and tempting with treats before Mugzy would lay on Luke’s bed. He has never climbed into Luke’s chair.
My hubby and I are now in our seventies. Mugzy is the center of our lives. I cannot thank HSHV enough for investing the time and resources to save Mugzy and his eyes. He has changed our lives and brought us so much joy. 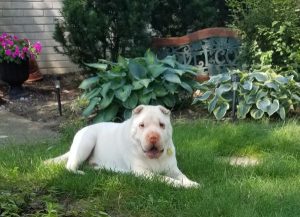