October & November big months for deer-vehicle collisions, Here’s how to avoid them

October & November big months for deer-vehicle collisions: Here’s how to avoid them 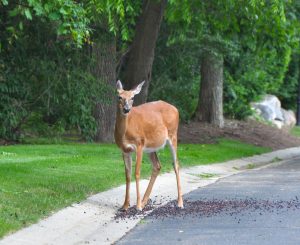 We’ve all seen the carnage of an animal hit in the road.  Some of us have been in such accidents.   Animal collisions injure and kill animals and can be dangerous to people.  The Humane Society of Huron Valley (HSHV) responds to hundreds of calls related to hit-by-car animals–both wildlife and domestic animals–each year.

“Although we’ve seen a few disturbing cases where people hit animals on purpose, most people want to avoid hitting an animal and are very upset when an animal has been hurt.  Our goal is to help animals and people stay safe,” said Michele Baxter, head of HSHV’s Animal Cruelty and Emergency Rescue Department.

“During discussions about Ann Arbor’s deer population, many worries were expressed over deer/car collisions.  Even though Ann Arbor’s deer collisions are not on the rise and don’t compare with the number of car/bike collisions, we believe more driver education would be helpful for everyone,” said Tanya Hilgendorf, HSHV CEO.

Spring and fall tend to be the worst times of the year, but October and November are particular high risk for deer collisions due to mating season.  As we move into fall, the Humane Society of Huron Valley would like to remind drivers to be cautious about deer and other animals in the road and how to prevent accidents, and what to do if they do accidentally hit an animal.

2)      Be extra aware during dawn and dusk.  This is when visibility is low, and activity of certain species may be high.  Deer can be seen any time of the day, but are crepuscular– most active when the sun is going up and coming down.

3)      Scan the sides of the road.  Watch for light reflecting from the animal’s eyes (“eye shine”) and movement at the side of the road.

4)      Use your high beams.  High beams help visibility on dark roads.  Use when there is no oncoming traffic.

5)      Slow down.  Collisions are more likely when people are driving beyond the speed limit and on high-speed roads.

6)      Know the roads.  Although certain animals can run (or casually stroll in the case of animals like turtles, geese or ducks) in any road, some roads are more risky than others.  Ann Arbor has a lot of great parks, nature preserves and wooded areas interwoven throughout the city.  Collisions with deer and other “woodland creatures,” like foxes and raccoons, are more likely on roads that go through heavily wooded or more rural areas.

What should you do when you see an animal?

1)      Slow down.  If you see an animal on the side of the road, slow down until you have safely passed the animal.  Use your flashers to warn other drivers.

2)      When you see one, prepare for more.  Many animals travel in groups or family units.  Fawns are known to stay by their mothers for a year or two.  Know that when you’ve seen one, there are likely more to follow.

3)      Don’t veer.  If an animal suddenly jumps in the road, slow down as much as possible WITHOUT swerving or losing control.  Apply the brakes, keep your hands on the wheel and come to a controlled stop.  Only steer around the animal if you can safely do so.  Honk your horn in short bursts to drive the animal out of the road.

If a collision is imminent, officials strongly advise not to swerve. The biggest danger comes from when people veer into oncoming traffic or collide into trees or similar on the side of the road in order to avoid the animal.

What should you do if you do hit an animal?

If you are injured or your car is damaged, call 911 immediately.

For injured animals, call HSHV’s emergency rescue line: (734) 661-3512.  Don’t attempt to move an animal.  The Humane Society of Huron Valley provides emergency services to sick and injured wildlife and stray animals.  Field officers are dispatched the area and animals are brought to the shelter for veterinary treatment and wildlife are transferred to local licensed rehabilitators when possible. Although animals who are hit by a car are a top priority, wait times may vary as only one officer is on duty at a time and may be servicing another part of the County.  This service is provided free to the Washtenaw County residents, and we are on-duty 24 hours a day, seven days a week. For removal of dead animals from public areas, call the Ann Arbor Police Department’s non-emergency line: (734) 994-2911.