I adopted Phoenix from Tiny Lions Cat Cafe in 2019. I’ve wanted a cat since as long as I can remember, and funnily enough, I always dreamed of naming my cat Phoenix after my favorite actor River Phoenix. When I saw Phoenix on the website, already named Phoenix, I knew we were meant to be.

When I went to Tiny Lions I was visiting with a few different cats, and Phoenix was very stubborn and wouldn’t come near me. Then as we were about to leave, we were telling the receptionist the choices we were down to. As we were talking, Phoenix literally jumped on the receptionist desk and walked over to me like “pick me!!!” She is SO feisty and she absolutely loves cardboard boxes and mouse toys. She also loves to watch videos of mice and birds on YouTube. She has such a personality and the two of us are two peas in a pod. We’re both so lucky to have found each other and I’m so thankful to HSHV and Tiny Lions. 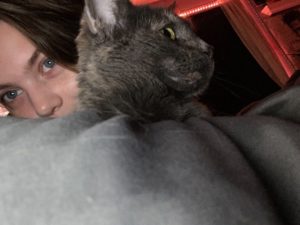