I woke up one day when I was 20 years old after having a dream about my childhood dog who had just passed away. Later that day I went to HSHV just to look, and ended up bringing home Pip, my best friend. That was almost 7 years ago now (November, 2015). Pip was at HSHV for over 20 days, and had been adopted and returned before I got him. Their loss! Pip has been the best thing that ever happened in my life, and everyone who meets him absolutley loves him. He has brought so many smiles and so much joy to so many people.

I found his previous owners HSHV’s Instagram page when I found an old post about Pip. We met up with his old family at a park and they gave me more insight to his life. He was only 1 when I adopted him. Pip is now 8 and he just got a little (canine) sister. He is adjusting so well and I’m hoping she will keep him feeling young.

I work from home, so Pip spends his days laying in the sun, playing with his toys, and cuddling with us. He loves chasing squirrels and going on walks. He is a nervous guy around water and big dogs, hates thunder and fireworks, but we have a routine to help sooth him during those events. He’s one of a kind and I am so lucky to have been connected with him. Here’s to many more years with Pippy boy! 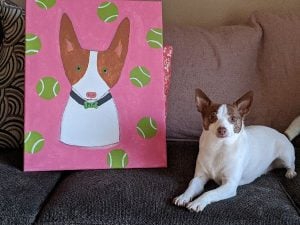