As summer comes to a close but our need for safe outdoor recreation does not, we need to be cautious about engaging in activities that sustain cruelty.

Although I didn’t watch it, I hear Tiger King’s Joe Exotic now has a personal understanding of why wild animals don’t belong in cages. Now that he’s in one.

The animal entertainment industry has a long and sordid history of abuse, well beyond caging. Flourishing over many decades, we humans demonstrated our “superiority” over animals by tearing them from their homes, kidnapping their babies, breeding them to excess, and imprisoning them in small barren cells.

We gawked at them and used fear and violence to keep them under control and teach them to do silly things to make us laugh. When there were too many, or they outlived their usefulness, they were culled, neglected to death, or sold to research.

Humans have a natural interest and love of animals. But that interest is exploited and that love betrayed by those without a moral compass for animals. From traveling circuses to roadside zoos to marine animal shows, many who still patronize these activities are clueless to the mistreatment behind the scenes, often believing fairytales of love and rescue.

Recently, we were disappointed to see MLive publish a news article that promoted Michigan’s Oswald’s Bear Ranch where, for a fee, visitors take pictures with purported rescued baby bears. The article failed to reveal a myriad of problems already known about the facility, let alone concerns expressed by wildlife and animal welfare experts.

MLive isn’t alone. As often happens with animal issues in the media, there is scant critical analysis or expert opinion offered. If given space, animal advocates are often depicted as wackos or grouches just out to ruin everyone’s good time.

With Oswald’s Ranch, most sources lapped up every spoonful of BS fed to them. The romance continues even after hunkered down Americans watched Tiger King and learned about the cruelty of pseudo wildlife sanctuaries.

Perhaps the most significantly overlooked is the fact that most of Oswald’s bear cubs are not rescues– but instead, come from notorious captive breeders who prematurely separate babies from their mothers and sell them for profit.

Further, even in a world of anemic regulation and toothless oversight, Oswald was cited by the USDA for using physical punishment to get baby bears to sit nicely for pictures. 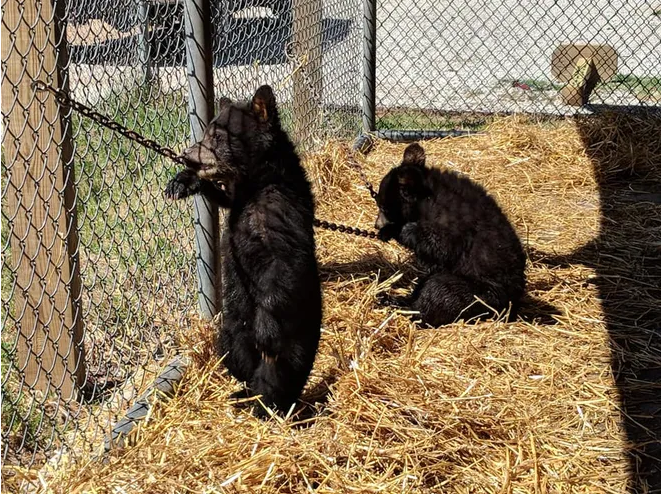 Oswald makes his money off of tourists who want to interact with baby bears and get up-close pictures with adult bears. That means he needs a steady supply of babies and a population of subdued adults.

The scenario doesn’t mimic nature and is not in the best interests of bears or human education. Keeping animals in confinement for our amusement teaches only bad habits, and it stirs our hunger for animal sideshows and bolsters reckless demand for personal ownership of wild animals through the exotic pet trade.

First, consider why bear sanctuaries exist. Sometimes, it’s to house bear cubs orphaned when their mothers are shot for being too friendly. (Oswald’s apparently received two cubs for this reason.) While national parks beg visitors not to feed the bears, some people just cannot resist. The result is a bear acclimated to people that must be killed to protect human safety.

Ironically, that’s exactly what happened to a juvenile bear at Oswald’s Ranch after she escaped her enclosure. Killed for being friendly.

Second, consider the lesson. Do you think the crowds of delighted visitors taking pictures with baby bears as they feed them spoons of jelly and Fruit Loops leave with a true respect for nature and the dangers of feeding bears in the wild?

As a roadside zoo, Oswald’s actually runs afoul of Michigan’s Large Carnivore Act. But, it was shielded by legislation signed into law by Governor Snyder in 2013 who said, “Oswald’s Bear Ranch is an important piece of the Upper Peninsula culture…providing the public with education about black bears.”

But what lesson is more fundamental than “Don’t feed the bears”?

When we expressed our discontent with the MLive article, an encouraging number of people already had an impressive understanding of the issue. But there were also many responders who had visited the ranch and defended it for various reasons.

Animal cruelty is never without its co-conspirators, often unwitting. Or with the help of the proverbial “blind eye,” turned so that we can keep doing what feels good.

We also know that making moral choices can be a huge challenge in today’s complicated world. That is why HSHV focuses so much on education and awareness. Our goal is to help compassionate people do “less harm and more good.”

I get the draw of places like this. If I weren’t acutely aware of humans and their easy descent into animal cruelty for money, fun, or convenience, I, too, would want to hold a baby bear!

But wild animals are not meant to live in captivity, and forcing them to do cutesy things to delight human audiences is never in the interest of animal welfare.

True sanctuaries and conservation-focused zoos give animals plenty of natural, species-specific space and the ability to express instinctive behaviors. The attention is on THEIR quality of life. There are no animal shows, spoons of jelly, or selfies.

Of course, animal entertainment abuses extend way beyond captive wild animals, including trophy hunting, dog fighting, rodeos, and horse and dog racing. We desperately need better legislative and regulatory protections for all animals. But one of the simplest things we can do is not support frivolous entertainment activities with our money. Even if the kids beg. Let’s show them that doing the right thing is not always fun, but there is great honor in sacrificing for those we love.