I had been looking for a cocker spaniel to adopt, since my last one had passed away 6 years ago. The time was right and I was ready. My niece worked at HSHV and called me one day to say a cocker had come in. I jumped in the car with my sister and drove down.

What I saw was a senior cocker spaniel in bad condition. He had been matted so his hair was shaved down in various parts of his body with tufts of hair sticking up. He was quiet. Never barked even though the kennels were full of barking dogs. Took him outside and he was great on a leash. Played with him and knew that I wanted him. I was a little leery of adopting a 9 year old dog as I had only gotten puppies before. I was afraid I wouldn’t get to spend much time with him. I took him home.

Iggy’s been with me since that day and is now 18 years old. He still is a mellow dog. Doesn’t bark at the train that goes right by my apartment. Is friendly with other dogs but doesn’t want to play: just wants to say hi. Loves car rides with his head out the window. Loves walks, walks with me in my walking group on Mondays and does 3 miles with no problem. He’s very fit. Doesn’t have arthritis or cataracts. He does have Pancreatitis and is on prescription dog food as well as boiled chicken that I cook for him every week. He seldom has a flare up. And I have meds on hand in case he gets an attack.

He has brought such joy to my life. I don’t know what I’d do without him. He goes with me everywhere when I run errands. He loves the dog park where he chases his little pink balls. He is the perfect match for me. I work from home and he has a chair right next to mine where he sits all day just to be near me. We snuggle on the sofa and every night he sleeps in bed with me. I realize that my days with him are numbered and just try to make sure he has his best life. He does have to wear a diaper when I’m gone for more than a couple hours. He doesn’t mind and I don’t mind washing them. It’s the least I can for him. He’s lying on the sofa next to me as I write this and heart is full. He’s my best friend. 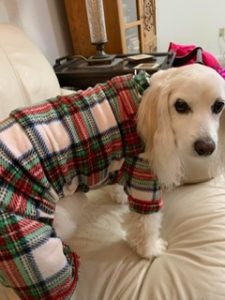