We adopted Ruse from HSHV in December 2019 after losing our cat Ginny (also adopted from HSHV) to acute kidney disease in November. Ruse was right at home very quickly and the perfect addition to our home.

In February 2020, I saw Mari pop up on HSHV’s page, and her story made me so sad. She had lived in a shelter for 7 years – her entire life – and had just been moved to HSHV in hopes that she would be adopted. Our son was 7 at the time, so I kept saying “Seven years! That’s his whole life!” Finally, my husband went to adopt Mari on my birthday.

She was so afraid at first. She hid behind her litter box in the bathroom and hissed if we came too close. She never left the bathroom. I put a pillow in the tub and sat in there to read, occasionally talking quietly to her to get her used to us. Obviously, in March 2020, everything shut down and suddenly all four of us humans were home all day, so getting Mari acclimated to us and then to Ruse became our project.

Using treats, I was finally able to entice Mari to tiptoe closer to me and eventually was able to touch her briefly as she grabbed the treat and retreated. It was a slow and very long process, but we kept it up for 6 months until the day that she slowly and timidly climbed onto my lap and fell asleep there.

Introducing Ruse and Mari to each other was an equally slow process, and in the same slow and timid way Mari finally warmed up to Ruse’s enthusiastic, playful ways. Now they chase each other around the house, play together, bathe each other, and most often…sleep together.

We’re so thankful to HSHV for their work and for bringing Mari there, so we could bring her home with us! 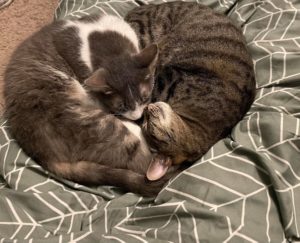