Ozzy is a big, beautiful, silky boy of nearly five. We adopted him from HSHV going on two years ago. He was advertised as having a luxurious coat and “melodious” voice. Both true – he talks nearly non-stop and answers you with a variety of “hellos!” We didn’t have him long when we realized that he longed to go outside – it was heartrending watching him bat the window and whine “melodiously.” We didn’t want him to wander or kill anything, so first he was trained to walk on a leash in a defined area. Then we bought the Whistle, a GPS for his collar that connects to an app on our phones. We can monitor his daily sojourns and know when he tries to leave his “safe” area, so now he can go outside (on a leash or alone or with us walking alongside him) for an hour or so. We can track him to the inch, tell him “Home, Ozzy,” and he trudges for the house, mumbling disgustedly all the way. What a character! Ozzy’s other hobbies are climbing into cupboards, muttering out the window at birds, ravaging his scratch post, and watching “Kitten Rescue” on television. 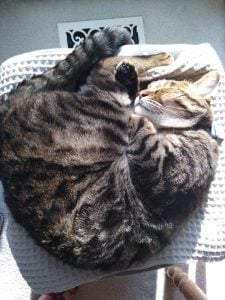