This past December my husband and I decided that we had too much stability and order in our lives with our last sweetie Lainey (previously Jade). Our lives were quiet, but we could tell that even with all her walks and play with mom and dad and dog park that our Lainey girl was missing something from her life.

Since we had gotten Lainey from HSHV, we thought we would try there again. After a failed attempt (the first puppy was not a good fit with Lainey at an intro) we eventually found Cole, previously Simon, and he and Lainey had the best intro ever! They were playing within seconds. He came home with us and they have been inseparable ever since! She drops her treats for him (silly girl thinks that he’s not going to get one), and he loves to nap with us! She even taught him how to ask to go potty in record time! He’s a rambunctious, sweet, and funny buddy who has come out of his shell so well. He has helped Lainey and she has helped him. Although he is more of a cuddle bug than her, they spend the whole day playing and napping while my husband and I work to afford the hundreds of bones that they deserve!

Thank you HSHV for helping us find the perfect addition to our family! The pic is of him trying to convince my dad (the grandpup) that he is just as big as Lainey and can do all the grown-up things. And my dad trying to explain that he is still very smol. 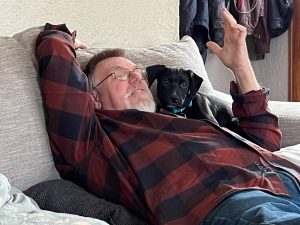