The Senior Pup that brought us together

Jake and I had started dating in high school and continued into college. Almost four years passed, and for a number of reasons, we broke up. As with many first loves, we still very much cared for each other and kept in contact. When Jake bought his first house that just happened to have a doggy door, I joked with him that he was then obligated to get a dog. After some time, he decided he did want a dog, and I suggested he adopt. During this time, feelings started to spark again, and I told him I would come to the shelter with him and even found HSHV to visit together. We came to the shelter with a certain 2 year old pup in mind, but after learning that our first choice was in foster care and likely not a good fit for Jake’s work schedule, we decided to “just look” at the dogs they had, hoping to find a dog similar in age to the 2 year old we had planned to adopt.

We met with a few pups that just didn’t seem like great fits, and then we asked to pull Skippy into a room to meet with. We didn’t think we’d actually take him. Skippy was almost 14 years old. “I don’t think I want a dog that old,” Jake had said, and I agreed, but we decided to try anyway. We waited for a volunteer to bring the old man in, and were surprised when an energetic big dog rushed into the room, weaving through our legs and giving us lots of big, sloppy kisses. He made us smile and laugh, but it wasn’t until we took him on his walk that Jake uttered the words, “Yeah. This is the one.”

Jake adopted Skippy that day, and a little over two months later, we made it official again. I’ve since moved in with Jake and Skippy, and often Jake and I talk about how lucky we were to have picked the best dog in the whole shelter. He’s come leaps and bounds. Dog reactive when we adopted him, he now rarely even barks at other dogs. His puppy-like energy hasn’t faded, and there are countless days we find ourselves questioning his age. As his 15th birthday approaches, Jake and I know we likely won’t have Skippy on this earth for too much longer. As we plan our future together, we remark on how we’ll tell our kids about our first dog together and how that first dog was the best dog either of us had ever had. While we mourn that Skip will likely never know our future children or be with us for the long haul, we’re so grateful to have this time with him now as we start the rest of our lives together – time well spent with the pup that brought us back together, the sweetest and best dog in the whole world. 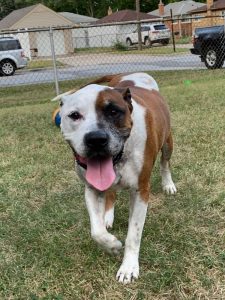