I’m told that little Stewie was one in a litter of three kittens found in Hamtramck, and they were transferred to HSHV just four days before I visited. I was looking for a young adult cat, but somehow ended up sitting in a room with three adorable kittens.
His bigger brother and sister were so brave, climbing all over me. He wouldn’t come out from the kitty tower, but he let me snake my hand in to pet his head. He purred.
Something about him had me sold.

Our family has endured a lot of unexpected, traumatizing changes this past year. After moving several times, we finally settled into a place to call home for now, but something was missing.

Stewie hid in a closet for two days. We talked to him a lot and eventually lured him out with a length of twine. Once he was near, he just flopped for pets, belly rubs and all. Within a few hours, he became ‘Kannan’. Kannan now rules our household and has no fear. He’s learned how to open certain doors. If it’s a door he can’t open, he knows how to demand that a human opens it for him. He waits at the window for my 13 yr old son to get off the bus. He chirps cute Hello’s and follows him around. My 12 yr old daughter carries him around like a baby. He lounges in her arms and purrs.

His two newest quests:
1. Lamp with pull chain. Bat chain around. Light on, light off, occasional crashing down of lamp.
2. Stalking anyone who neglects to securely latch the bathroom door. That toilet swirl is fascinating!

My son: “Kannan is so amazing. After only a week or two, he started loving us…and knew how much we love him.” 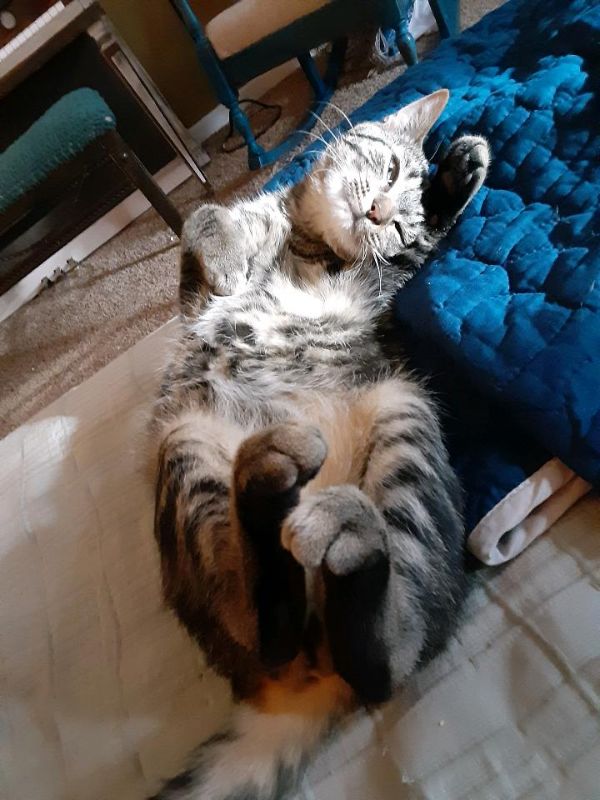