I am writing one of my favorite Happy Tales. I am an Animal Care Tech in adoptions at HSHV. I have been working here for over 7 years and have had many, many happy stories and many, many happy tears. The story of Tang/Ollie is at the very top for me. I did get permission from his adoptive family and they would love for me to share his story.

It started when I saw a crowd of staff around cage 19 in Uptown Cats. Everyone was fawning over a “new guy.” It was an orange and white older-looking fella named Tang. He looked very rough and his eyes were a bit messy with possible entropic eyelids (when the eyelid is turned inward and the fur irritates the eyes). The white on his face had turned yellow and gray from medicine and tears. Yet he was such a happy guy, rolling on his back begging for scritches under his chin and on his big “man cheeks.” He was also FIV positive. At least five staff members declared their love for him on the spot. He was chirping and purring and having a grand time soaking up everyone’s love.

I was one of those in love with him, and I cleaned and primped him up as best I could. The vet team performed surgery on his eyelids, and then came the E-collar (cone). Our sweet Tang looked even less attractive, yet his huge spirit still soared. Rubbing himself on everyone that stopped to see him, still chirping and talking to anyone in range. But sadly the adopters passed him by, over and over, perhaps subconsciously, as they sought out kitties who appeared normal and resting.

One day, I saw a lady who looked like she had a question. I approached her and we had a great conversation about her and her daughters looking for just the right cat. We talked for awhile discussing many aspects of adopting, expectations and outcomes. They had a cat “on hold” and were trying to decide if they were the right fit for the family. She wasn’t “all in” on the choice and had a couple reservations. I asked her if she was open to looking at another cat or two and comparing. She agreed. Suddenly, right around the corner was Tang! I just KNEW this would be the perfect fit, if she was able to see his potential. Before we went around the corner I explained his story and I told her, “Be ready, because as soon as you touch him, you will fall in love!”

And guess what!! He came through rolling on his back and throwing up his chin and purring and chirping, his little legs pumping. I let them get to know each other and it worked. But we still had to get the daughters on board. They came by later in the day and THAT was THAT! Word was out and all his fan club came around to say goodbye or see him off the following afternoon.

His beautiful family changed his name to Ollie and they have kept me updated on his progress. You can see it in the photos: the first one before the surgery, afterward when he still had his stitches, and finally now – stitches and cone all gone!

Thank you Kerry and girls for giving the staff such a lovely story to tell. This is a beautiful place to work, but it can be emotionally exhausting at times. These updates and seeing them in their homes makes every second worthwhile. 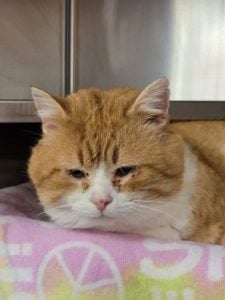 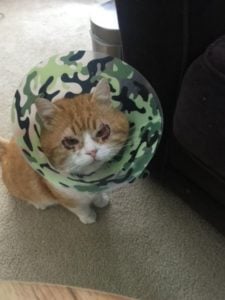 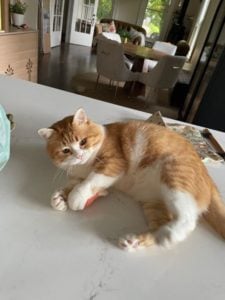