One year ago today I came to the Humane Society of Huron Valley, still in mourning over my deceased cat and looking for new feline companions. I found a pair of black and white brothers who were, at the time, named Nate and Mickey. Someone who worked there put a note on the outside of their cage pleading that anyone who was interested in adopting one of them to adopt both.

I didn’t really need to be asked that, because I wanted two cats, but I still want to praise whoever it was who had spent time with the boys and had gotten a sense of their personalities and their bond and knew they needed to stick together. I brought them home and renamed them Mickey “Puck” and Nate “Bowie.” Bowie wanted to just hide under my bed. Puck wanted to be best friends and see the word. I kept them in my room for almost a week to get them adjusted, but once I let them loose, Puck immediately went exploring. Bowie’s need to be with his brother helped him overcome his fears and he soon followed.

And so it went. Anyway, a year later both boys are fully at home here. Both boys are brave, content, friendly and loving. Would Bowie have ever gotten there without Puck? Probably, but it would’ve taken a lot longer and been a lot more stressful for him.

The boys still love each other very much and love to play and sleep together.

I don’t know who it was who put that sign on their cage, but they knew what they were doing. I’m endlessly grateful for your insight and sensitivity. The boys and I both thank you. 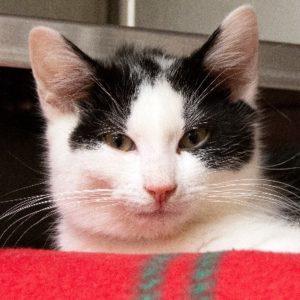 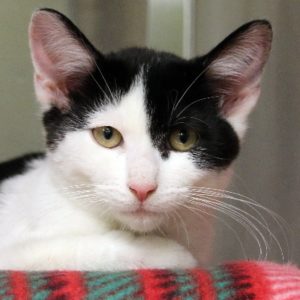