The dog we didn’t know we needed!

3 years ago, our cat of 18 years passed away. After the extreme morning period, my daughters and I finally felt ready to donate her food to HSHV. It was a Wednesday morning. The girls wanted to look at the dogs before we left. After doing a lap, we were ready to leave when one of the volunteers informed us that the Love Train was coming on Friday. I chuckled and told my daughters that the last thing we needed was a puppy, as we had a 15 year old blind and deaf Yorkie at home. Friday comes, and we ended up having to run an errand in Ann Arbor. The girls begged to go see the puppies, so I agreed under the strict orders that we were not bringing one home. We arrived at the shelter right as they were opening. We had to wait our turn to see the puppies and I just wanted to run the errand, so we compromised by just looking at the adult dogs before leaving.

We walked in through the doors, and the first dog we got to was Sampson: a 10 month-old Great Pyrenees/Golden Retriever mix. He was standing with his head down pressed against the kennel doors. My husband has always wanted a Golden. I texted a picture to him at work. He responded immediately: “How is he? Should you bring him home?” A little stunned, I talked to a volunteer who encouraged us to take him for a walk. We took a slow walk around the garden and stopped at a bench. I sat down, and he just pressed into my lap. I text my husband, “He’s so gentle. Did great on the walk. Seems like a sweet boy. I’ve named him Finnegan.” My husband texts back, “Just bring him home!”

Still in shock that I’m bringing home a 75 pound dog, I fill out his adoption paperwork. Leaving the shelter was like leaving the hospital with my first born! I couldn’t believe we were just going home!

Within moments of getting home, he was smiling and playing. We introduced him to our Yorkie through a baby gate. He smelled her and wagged his tail. I put her on her spot on the couch, and brought Finnegan up on a leash. He sniffed her on the couch and continued on his way. After that, he would sniff her every day and lick her ear. He was so sweet and gentle to her.

He settled into our house perfectly in just a few days. We couldn’t imagine life with our goof ball! If he’s unhappy, he’ll bring a random shoe and drop it on the ground. When he’s happy, he jumps and spins. He now has a younger sister, who he helps keep in line and lives to bathe. He loves to sit under the tree in the backyard and keep guard. He’s very diligent on squirrel patrol. He loves waking the children up in the morning. He loves his after dinner walks. I never knew how much an unplanned dog could fill our lives and hearts. He was meant to be with us! 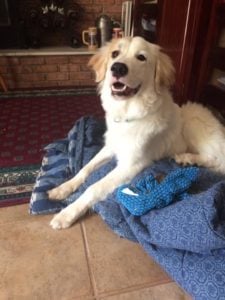